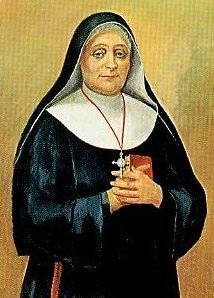 Who is Blessed Maria Schinina`, the foundress of the Sisters of the Sacred Heart of Jesus? What prompted a young woman of wealth to choose to live her life serving the poor, the sick, the elderly, and the abandoned? Why did she struggle for so many years to establish a Congregation dedicated to glorifying the infinite love of God.Maria Schininà was born in Ragusa the 10th of April, 1844 to Giambattista and Rosalia Arezzo. Both of them were noble in wealth and in sentiments. The fifth of eight children, she lived her days of infancy and adolescence surrounded by the care and attention of her parents and brothers.


Until 21 years of age, Maria was no more than a carefree girl born of a wealthy family of nobles. Her intense and happy life alternated between religious duties which she carried out with her family and her love for beauty which she continuously perfected through music, fashion and above all dancing. Maria never displayed any particular spiritual inclinations, even if she inherited her parents’ sensitivity towards the poor and the needy, which eventually planted a seed for her future decisions.

The death of her father in 1865 induced her to change her life, which she often declared that she did not satisfy her inner needs. Her soul could no longer ignore the cries of the poor who were living only steps away from her home. Her comfortable lifestyle was too much of a contrast to the misery just outside her door. It was for this reason that Maria began to look into herself enlightened by faith and God’s calling which became ever clearer at the feet of the Eucharist. These were years of deep reflection.

In 1874, her youngest brother got married, leaving her and her mother alone. This posed no obstacle to her. She took off her elegant clothes and dressed like the poor, saying: “Let that which served my vanity go to the poor.”

From this moment on, she decided to dedicate herself completely to the sick, the poor, to the outcasts who languished in the most squalid hovels in the city, and to the abandoned children, without paying attention to the criticisms from people of her social class who thought she was insane. Everything was suggested to her by the love for the Eucharist which would constitute a fundamental characteristic of her Christian life and would be passed on to her daughters with the same zeal making it the center of her apostolate.

Maria made herself poor to serve the poor, certain to cure in them “the suffering members of Jesus’ body.” Her life definitely took a new course. She started to participate in various humane and charitable initiatives.

In 1877 she was elected directress of the newborn Pia Unione delle Figlie di Maria. With this position, she was able to attract all the young people in Ragusa, becoming a living example of how to carry out a “true social revolution” in the light of the Gospel.
The voice she heard before the image of the Sacred Heart one day while praying, incited her to obey the “Ministers of the Church”. This brought her to renounce the monastic life and found an Institute following the advice of Archbishop Monsignor La Vecchia. This Institute would give material and spiritual aid to the poor and the needy in her city.

She loves Christ in the poor and through them reaches the total conformation to the sentiments of His Heart. “Love and Reparation to the Sacred Heart of Jesus” meant for Maria Schininà, an offering of herself as a victim of expiation to God’s love in reparation to Christ’s rejected love by serving those who are poor and marginalized.

She called the new Congregation Institute of the Sacred Heart.  The first residence was a rented house, but this soon proved inadequate due to the many demands of the apostolate.  It was 1889, that an adventure began for the “Angel of Ragusa,” an adventure that is still very much alive today. It was an uphill road trodden with moments of joy, fatigue and tenacity, a true walk of faith and sacrifice. This progressively led to the Institute’s pontifical recognition as well as a notable expansion in Sicily, in other Italian regions and in other countries in the world.

After more than a century of activity, the Foundress’ marked sensitivity towards the poor and the needy even found its place in today’s new realities. In a world which is more and more bound to laws of efficiency and the market, there is always less space for those who are no longer useful, such as the elderly. In doing so, the heritage of experience and memories are no longer passed on to the young generation within the family. Often they vanish in solitude and at times they are totally abandoned.

In the Retirement Homes, the Sisters work continuously to guarantee the elderly the dignity and the serenity to live their last years in peace. For those who believe, this means an anticipation of a peaceful encounter with God.

The orphanage, the starting point of the Foundress’ apostolic work is still the strongest element that constitutes their service. Orphanages have been practically non-existent for the past two decades. Now, problems like abandonment or neglect of minors are in the hands of smaller and more agile structures: better known as “family homes.” In these new structures, the children who are entrusted to them by judicial authorities come from harsh realities, such as total abandonment or severe cases of neglect by their parents. These wounded children, thanks to the help of the Sisters and professional experts, are given the chance to live a peaceful and joyful life; a healthy one, with adequate nutrition and education.
On the footsteps of the Foundress, the sisters commit themselves daily to these “little ones” in the strict and evangelical sense of the word.

The sisters are also active in the education field, with schools of every order and level: from preschool to high school. These schools are attended by ex-terns as well as intern students of the family homes. Through education, they hope to enhance the complete growth of the person in an environment permeated by the Evangelical spirit of liberty and charity.
Not only knowledge is given to the students, but common values, aware that knowledge must always be directed to helping the individual grow in humanity.

They are present in hospitals with their expertise in the paramedical field as well as in management, trying to alleviate each person’s suffering with patient and loving dedication. They take care of the body and alleviate the spiritual wounds of the various patients, giving the testimony of their Consecration to God and his children.

They even serve as assistants to many poor or abandoned brothers who live a difficult life. Lastly, they make visits to people who are alone and need help and comfort, visits which as the Constitutions say, “Find their roots in Mother Foundress’ form of charity, which goes beyond the human aspect. She would not alleviate solely physical pain but would give importance to suffering illuminating pain with the light of faith”.

Living “in Christ” is a formula that embraces the world inside and outside. For the Sisters of the Sacred Heart, life in Christ represents the most profound adhesion to the spirituality of the foundress.  As a matter of fact, she did not consider her works only in terms of assistance: “We must not become proud or vain about our activities – she reminded her Daughters – the poor are God’s poor. Let Christ’s influence abound in you so that he may think his thoughts through your mind and do his work through your hands.”

The love and faith that comes through the Eucharist makes it possible for the Sisters to see Christ in the miserable guise of the various forms of poverty in our times. This is why until now; there is only one love of Christ, the Christ who has identified himself with the poor.  This peculiarity of her charism has marked the Congregation’s course adapting and evolving itself according to the changing times and places.

Today, the Sisters of the Sacred Heart of Jesus are present in many Italian regions.  For over a half century they have been in the United States and in Canada.  They have been in missions abroad since 1961: in Madagascar, Philippines, Nigeria, Romania, Panama, France, India and most recently in Equatorial Guinea.

Orphanages, dispensaries and clinics, schools, women’s centers, parish pastoral work, visits to prisons, human and spiritual promotion and long-distance adoption programs. These are all activities that the Sisters in the Missions carry out in these far away places. Here, the gap between the rich and the poor has severely accentuated problems which no longer exist in the industrialized countries, like: hunger, malnutrition, illiteracy, and disease.  A heavily widespread material and spiritual poverty for which the Sisters attempt to seek God’s redemption, sharing the same walk and the same bread with the people.